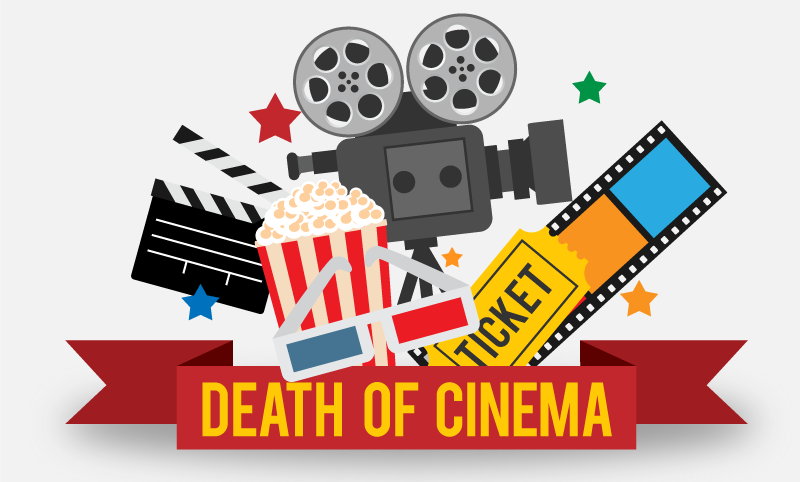 Is PVOD bringing on the Death of Cinema?

There’s a lot of talk lately about the death of cinema. With the advent of movie streaming services like video on demand, Netflix, and Hulu, there is a real threat to the movie theatre industry looming. But is it enough to kill cinema all together? Mashable sure seems to think so, but I’d argue otherwise. The cinema has much to offer patrons that simply can't be replicated at home... or can it?

Today we take a look at the latest "theater killer" and examine how it’s implementation could affect the industry. At the end of this blog we’ll ask you are you team #deadcinema or #cinemalives.

If you’re already on team #deadcinema, then you likely have already heard about the game changing service that could dramatically alter the cinema game forever. Two years ago, Napster co-founder, Sean Parker, announced his plan for a new streaming service, Screening Room. The service would allow you to view movies while they were still in theatre, effectively killing the one advantage cinemas still have against on-demand services: exclusivity.

PVOD, or premium video on demand, is much like your standard VOD service, but it seeks to release movies at the same time as movie theatres. Thus eliminating the industry standard, 90 day grace period, in which theatres are the only places to have access to brand new releases.

And while the proposed price point for a movie on Screening Room is rather steep, at $50 a pop, a family of even four viewers would be spending at least that much to see the movie in theatres. Add in the cost of concessions, and now folks could be saving money by paying top dollar to see it in their own home.

Considering how quickly Napster effected the music industry, it’s no surprise that studios and theatres alike are working to prevent a service like Streaming Room from becoming a reality. Since its announcement two years ago, Streaming Room has yet to move beyond a concept and through to an actual service that viewers can take advantage of, but all signs are pointing towards 2018 being the year of PVOD.

Of course there are those that believe cinema isn’t going anywhere and are instead looking at ways to make PVOD a part of their business model, rather than competition. AMC Entertainment CEO, Adam Aron, is making sure that AMC stays involved in the discussion of PVOD, “we at AMC agree that there’s a real opportunity to work cooperatively to increase both the bottom line of movies studios, but also to increase the bottom line of AMC.”

As far as the 90 day exclusivity window goes, Aron states, “I can tell you categorically that no one is close to resolution of this matter, there is no industry consensus.” Which leads us to believe that Screening Room may have a chance at the movies sooner than 90 days, but certainly not on the same date of release as the theaters themselves. Perhaps the window gets shortened to 30 days, or even two weeks? And even then, is that a short enough window to drive people to stay home? Time will tell.

Team #cinemalives currently still has the advantage of exclusivity in their corner, but also the advantage of the communal experience. There’s a reason people will pay to see a band play their music live, or watch a sports team score the winning touchdown: it’s the experience. Movie theatres still have that going for them. There is something special about the smell of popcorn, the booming surround sound system, the excitement over a new release. It all builds together to make the movie going experience as we know it today.

Plus as cinemas expand into larger foodservice roles, adding premium seating and beverages to their line up --- the experience keeps getting better. AMC, the leader of the cinema world, was one of the first to realize the potential income that comes from the addition of foodservice to the lineup. Making the date-night favorite, dinner and a movie, possible at just one location rather than two. And these are the types of experiences that will keep AMC ahead of the PVOD game.

So now that you know the dilemma, are you team #deadcinema or #cinemalives?

As long as there is some sort of grace period from which Cinemas get new movies before PVOD, I tend to think cinemas aren’t going anywhere. Sure there will be some folks who will say the death of cinema is upon us and opt for PVOD over a night at the movies.  But if the movie experience maintains the trend of becoming more experiential with expanded concessions, they’ll be making more profits per patron --- balancing out the loss of a few viewers to PVOD.

It's that time again, Christmas carols are being sung, folks are frantically shopping for gifts...
Read More