Wing in a New Year of Profits: Pizza and Chicken Wings Brings Profits

If there is one thing you can count on American’s continued interested in, it’s pizza. Thin crust, thick crust, brick oven, deep dish, sweet, savory and everything in between, there is almost no type of pizza we won’t try. And there is just one appetizer that has almost become synonymous with pizza: chicken wings. We've written about the magic combo of pizza and chicken wings before, but today we dive deeper with a full white paper for download to show the benefits of adding chicken wings to your pizza concept.

The lowly chicken’s wings were once regarded as the worst part of the bird. It wasn’t until a bar in Buffalo, NY decided to toss an accidental order of wings in a spicy sauce for hungry bar patrons that the wing took off as a viable appetizer. And it wasn’t until the 1994 Superbowl, when Domino’s Pizza first started promoting buffalo wings as a side to their pizza, that wings became a pizza industry staple. 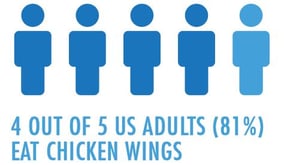 Since then, wings have grown in popularity, so much so, that there are now entire establishments with menus built around wings. So delicious and satisfying, it’s rare to see a pizza menu (or any menu, for that matter) that doesn’t have their own variation on the chicken wing. And if your menu is lacking an option for wings, now is the perfect time to consider adding it to your line up. Wings are highly profitable and a great up-sell opportunity for staff to score larger ticket orders.

Of course, there are some variables to consider before taking the leap into the wing arena. With this white paper we will guide you on the path to wing production and sales. We will explore the challenges and benefits of selling wings so you can feel confident knowing what to expect and how best to prepare. We’ll also give you some promotional tricks of the trade to take your wings sales soaring.

Want to read more? Our full white paper is available for free here.

We'll highlight the benefits and challenges to adding chicken wings to an existing pizza concept, give strategies to make the program a success and ideas for promotion of your new program. By the end of our guide you will be well informed on your options and equipped to make the leap into the chicken wing and pizza arena.

Sometimes you want to go where everybody knows your name and they're always glad you came…  no I’m...
Read More

If there is one thing you can always count on, its America’s continued love for fried foods. As we...
Read More

Profitable Appetizers for your Pizza Menu

When it comes to the pizza industry, the AutoFry is well known as being the king of chicken wings....
Read More