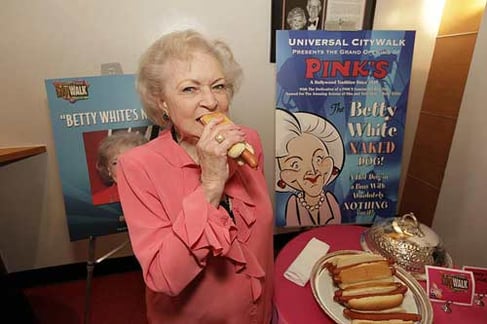 Anyone that has ever been to Hollywood has probably made a visit to the local landmark and internationally famous, Pink’s Hot Dogs. For 75 years customers have been driving to Pink’s for hot dogs, burgers and fries.  Celebrity fans of Pink’s include Michael Jackson, Marlon Brando, Whoopi Goldberg, Tom Hanks, and even Food Network stars, Guy Fieri and Bobby Flay.  Beloved actress, Betty White even ahs her own signature hot dog available at Pink's, The Betty White NAKED Dog.

But what makes Pink's Hot Dogs' menu so special? The answer to that depends on who you ask…

According to Gayot.com, The Guide for the Good Life, it’s the “ripe, bursting-with-flavor beef hot dogs.”

TasteTrekkers.com, Foodies Who Travel, says it’s the “an ever changing menu of ‘super star dogs’ you can keep coming back to Pink’s to taste the celebrity dujour.”

And a quick look through Yelp reveal Pink’s hot dogs to be “good and flavorful,” “with every bite giving a beautiful, juicy snap” and “classic quality ingredients at affordable prices.”

While the hot dogs are the stars in the Pink’s equation, no order is complete without the addition of French fries, which Pink’s produces in MTI’s own AutoFry.  Again, taking to Yelp we found the French fries to be described to have the “perfect level of crispiness...”  “They also have chili cheese fries, which are by far some of the best I have ever indulged in...” “You have to get the fries with chili and cheese. [They are] heavenly.”

With locations on both the west and east coast, Pink’s hot dogs are more accessible than ever before.  So we want to know, have you been to Pink’s?  What did you think?  If you’re planning a trip, what are you most excited to try? 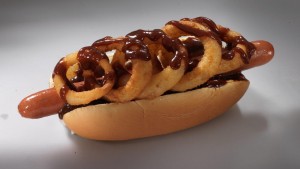 Personally, I’m intrigued by the Lord of the Rings Dog, a 9” stretch dog topped with delicious BBQ sauce and freshly prepared onion rings.  Sounds like it would pair well with an order of French fries topped with bacon bits and nacho cheese!

Ah yes, who needs a healthy New Year resolution when there are bacon bits to be devoured.

Ah National Hot Dog Day, you just don’t get any more American than having a whole day dedicated to...
Read More

Is there really any other snack that screams summer like the hot dog does? From ball games to...
Read More

Where can you go in the Northwoods of Wisconsin to find delicious food, huge portions and  one of...
Read More