Why do French Fries Smell SO Good? | The Science Behind the Scent

You’re sitting at your desk, it’s about 12:15 and you’ve yet to take your lunch break, you’re stomach growls. In strolls your coworker, and they’ve brought back their lunch to eat at their desk. And then it hits you: that smell, that glorious, mouthwatering, cravable, smell. It’s salty, sweet and perhaps even nutty. They’ve got French fries with their lunch and they’d better be prepared to share because now the entire office’s mouths are watering because the French fries smell SO good.

Let’s face it, French fries have a uniquely strong and delicious smell. If I’m being honest, the smell of fresh French fries is what I imagine heaven smells like, and up there the calories don’t count either! What is it that makes French fries smell so good? Turns out, there is some research behind the fried spud smell that everyone craves and today we’re diving in with a little science lesson!

Believe it or not, scientists have analyzed the aromas of fries and found as many as nine different smells comprising the French fry smell we all know and love. What aromas are French fries comprised of? You may be shocked to hear that a Leeds University study found nine aromas, including butterscotch, cocoa, onion, cheese, and even ironing boards! They also found that lightly cooked or under cooked fries only contained three simple aromas including bitter cocoa. 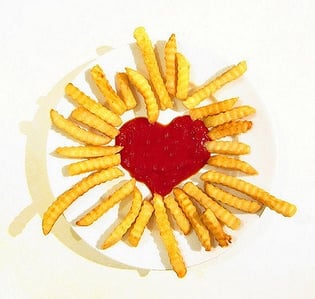 The Leeds University research was completed as part of National Chip Week in 2009, led by Dr. Graham Clayton of the Department of Food Science. His analysis included both laboratory testing as well as human focus groups, which allowed them to really pinpoint what made fries smell so good. To determine the unique aromas, the scientists collected the scent from cooked fries and then separated the different compounds to be examined by an ‘aroma-meter’ machine, (more formally known as Gas Chromatography Mass Spectrometry) a method used to isolate foods into their base elements.

The aromas that were able to be detected by the human nose were sniffed by the focus groups to document the type of scent and strength of each aroma. The results showed that the fries that had been cooked twice had a more complex smell, comprising bitter cocoa, butterscotch, cheese, earthy potatoes, onions, and flowers.

Perhaps this is better explained by Dr. Graham Clayton, who said, "Whether oven-cooked or fried, the humble chip doesn't smell of just chips – the aroma is much more complex and probably explains why chips are everyone's favorite.  One might not expect to find butterscotch or cocoa aromas in chips, but it has to be remembered that these are one part of the overall aroma… Perhaps these findings will see chips treated like wine in the future – with chip fans turning into buffs as they impress their friends with eloquent descriptions of their favorite fries."

So now you know, when you’re smelling those delicious fried potatoes, it’s not just one scent that drives you wild, instead it’s a combination of scents you already love…. Well maybe not all of them. I’m still not even sure what ironing boards smell like! Happy FRYday!

As you may have guessed, we here at MTI are big fans of the French fry. The AutoFry and MultiChef...
Read More

When you’re building a menu that customers will crave, you have to think of every little detail,...
Read More

Happy National French Fry Day! We cannot think of a better way to celebrate than shining the...
Read More