As we ease into 2021, we can’t help but think of the last time our country saw the roaring twenties. A time when jazz music was flourishing, flappers with page boy bob hairstyles were all the rage, and prohibition had begun to force people to find their own ways to entertain themselves. Quickly, the word Speak Easy became a popular term throughout cities and towns in the United States. These undisclosed locations were the saving grace for Americans recovering from not only a war, but a pandemic. We know, sounds a little too familiar? Luckily for us, there isn't a Prohibition Part Deux.

Almost 102 years ago, on January 16th, 1919, the 18th Amendment to the Constitution was ratified, banning the sale and/or importation on any form of alcoholic beverages. While prohibition is long gone, and giggle water flows freely these days, the need for a ducky time has withstood the years. There’s no one that knows this better than the crew over at Murphy’s Tavern in Rumson, New Jersey.

This authentic speak easy serves up their Manhattans with a side of history! When prohibition hit, a basement on Ward Lane became the secret hot spot for locals in Rumson and nearby towns. The building sat closely to the Navesink River, allowing smugglers and runners to move about without being seen. To this day, Murphy’s Tavern is serving up not only classic drinks, but fantastic food to boot! From Chicken Cordon Blue Bites to Disco Fries, and flavor packed pizzas, there is no shortage of good grub. 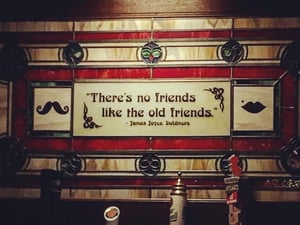 Unlike the distribution and consumption of alcohol at Murphy’s during prohibition, it is no secret that 2020 was undoubtedly a rough year for the restaurant and bar industry. And while we aren’t out of the dark just yet, there does seem to be a light at the end of the tunnel. Owners and operators have rethought their business strategies and developed other ways to remain open and continue sales. Heather and Robb from Murphy’s Tavern have done just that. At the end of 2020 they began offering private dinner parties. Patrons begin with an Amuse Bouche paired with a Champagne Cocktail and finish with dessert and choice of between an Espresso Martini or Hot Buttered Rum!

Besides being a little piece of our history, at its heart and soul this old speak easy is a place for great drinks, great food, and even greater friends. As it says on their website, Whether it's your first visit or 101st visit, you are sure to feel at home at Murphy's Tavern.

Nothing is worse than having a machine go down in the middle of the dinner rush, which is why...
Read More

The snow is finally melting, the temperatures are starting to rise and everywhere college students...
Read More